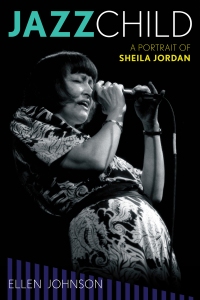 Jazz Child: A Portrait of Sheila Jordan is the approved complete biography revealing the fascinating life of the first female jazz vocalist to record on the prestigious Blue Note record label. In the story of this jazz great, biographer Ellen Johnson reveals the challenges Jordan confronted, from her growing up poor in a Pennsylvania coal mining town to her rise as a bebop singer in Detroit and New York City during the 1950s, to her work as a recording artist and performer under the influence of and in performance with such jazz luminaries as Charlie Parker, George Russell, Lennie Tristano, Charles Mingus, Sonny Rollins, and Thelonious Monk. Jordan’s views as a woman living the jazz life in an era of racial and gender discrimination while surrounded by those often struggling with the twin evils of alcohol and drug abuse are skillfully woven into the tapestry of the tale she tells.

How this all happened:

I started listening to Sheila Jordan in my mid twenties because I had this wild idea to sing duets with just the bass and voice. I thought it was a pretty unique idea until a friend of mine introduced me to the recordings of Sheila Jordan.  At that time I was studying and working on my “chops” as a singer and musician in a variety of genres with an unusual interest in avant-garde and music as a healing modality.

When I first heard the duets of Jordan and Harvie S (Swartz) I was memorized. Not only had I found a mentor with my own sensibilities but I was captivated by the musical conversations that transpired between these two artists. I had found a long-lost family member. In 1979 I packed up my car and left Chicago to relocate to San Francisco and listened to these recordings on the way.  I memorized every nuance while keeping my foot to the pedal across the Midwest plains, the mountain regions of Colorado, and finally to the California coast.  It was a visceral experience that remains to this day.

Approximately twenty-five years later I was calling Ms Jordan, asking her if she wanted to be part of a panel I was putting together and moderating for the now defunct International Association of Jazz Educators (IAJE) convention in New York city. A panel that would discuss the future of solo vocal jazz in both performance and education that eventually included Jon Hendricks, Mark Murphy, Jay Clayton, Kurt Elling, Kitty Margolis, and of course, Sheila Jordan. It was at that convention in 2004 that I finally met one of my vocal heroes and began a journey that I could hardly have anticipated at the time. Although I had talked with Jordan on the phone it was at the presentation of the Lil Armstrong Award during that convention that I first laid eyes on this phenomenal woman. From that moment on we became colleagues and friends and I became a believer in her message of her dedication to the music.

After that convention I invited Jordan to the west coast and arranged gigs and workshops for her in the Los Angeles and San Diego area. She would stay at my house and I would take care of the arrangements and promotion of her commitments. It was during one of those times that Jordan expressed her interest in having a book written and mentioned that someone had attempted to make some efforts in that area  but had taken ill. Her concern was having someone she trusted take on the writing and since I had already interviewed her and written articles in the past I offered my assistance. Six years later, after many interviews with Jordan and others relevant to her story, many  meetings together, collecting materials and photos, organizing chapters, preparing proposals for publishers and more we were able to find a publisher, Scarecrow Press.

I am, of course, both excited and anxious with a touch of intimidation as this is my first biography. My intention is to do justice to this amazing woman’s life by finding her voice within my own words. I want to thank Sheila for her courage and determination along with her never-ending belief in me.  I also want to thank those people who helped me either with advice, copy editing, finding a publisher (Scarecrow Press) and securing one which include Sonia Nordenson, Howard Mandel, Maureen O’Brien, Kirk Silsbee, Monica Faulkner, Rick Helzer, Gregg Akkerman, photographer Brian McMillian for the cover photo above that we hope will be the actual cover, and especially my husband, Jeff Foster who continues to support this project on so many levels.